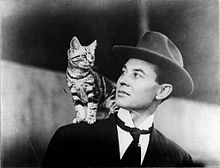 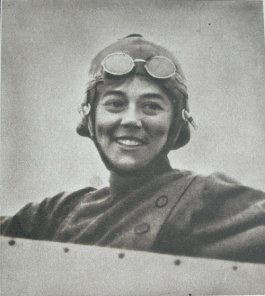 August 17, 1910. Deal, England. A novice American aviator, flying a French-made Blériot monoplane and misidentified in news reports as a Spaniard, makes the first passenger flight across the English Channel. He brings with him his mechanic—and a cat mascot. In an era where aviators need to keep sight of the ground to stay oriented, however, his real innovation is using a map and compass to navigate. Claiming that the day of his Channel crossing marked only his sixth time in an aeroplane, John Moisant (“moy-sant”) makes “a cometlike appearance in the aviation firmament,” becoming an instant American hero. Just as cometlike, he will be dead by the end of the year. Eight months later, his sister will become the second licensed pilot in America.

John Bevins Moisant was born in 1868 to French Canadian parents who immigrated to Illinois in the early 1850s and later moved to San Francisco. He had two older brothers and three younger sisters, including Matilde. In 1896 Moisant brought his wife and infant child to what was then known as simply “Salvador” in Central America, where his brothers operated a sugar plantation. In 1901 Moisant’s wife returned to San Francisco to petition for a divorce. Moisant followed her, and—in what would today be considered kidnapping—brought his five-year-old son back to Salvador.

In 1907 his brothers were imprisoned by despotic Salvadoran president Figueroa. Moisant organized three hundred Nicaraguan troops, led them into Salvador, and effectively started a revolution that lasted until the U.S. Navy intervened on behalf of the imprisoned Americans. Two years later, when Moisant again tried to start a Salvadoran revolution, the navy rebuffed him.

Moisant set off for Europe, reportedly on behalf of the president of Nicaragua, to study the potential use of spherical balloons and dirigibles in Latin American warfare. He happened to be in France at the time of the August 1909 Rheims international aviation tournament, which persuaded him that heavier-than-air flying machines were better adapted to his needs. Convinced also by what he saw at Rheims that effective military aircraft would require construction materials more solid than the standard bamboo and silkcloth, Moisant set about designing an aluminum aeroplane. After a year of experimenting, he abandoned his efforts and learned to fly a standard Blériot monoplane, which he reinforced with metal.

In the days following his remarkable Channel flight, mechanical difficulties hampered Moisant. It ultimately took him three weeks to cover the rest of the seventy miles between Paris and London, where he claimed a $25,000 prize for the first flight between the two capital cities.

Sizeable aviation prizes then being offered in America—useful for financing revolutionary activities—convinced Moisant to enter the international tournament held at Belmont racetrack (site of the thoroughbred Triple Crown race) in October 1910. Eugene Ely was present at Belmont, along with the rest of the Curtiss team. Alfred (“Fred”) Moisant, the eldest of the siblings, traveled north to serve as his brother’s manager.

John Moisant took second place in the Gordon Bennett Cup speed race at Belmont, losing to a more powerful Blériot monoplane flown by Englishman Claude Grahame-White. But the enthusiasm greeting his finish was nothing next to the jubilation that attended Moisant’s victory the following day in a timed race to and around the Statue of Liberty. Yes, he had a foreign name, had spent much of the past decade in Salvador, and had achieved his aviation fame in Europe. But at Belmont he was an American, and a great one.

Belmont Park rocked and roared…with an outburst of wild, uncontrolled enthusiasm…. Mr. John B. Moisant, American, had won the Statue of Liberty flight after it had passed hopelessly to all appearances to Mr. Claude Grahame-White.

The 42-year-old Moisant—he admitted to 35—was the toast of not just the town but the    country. (Grahame-White filed a protest against Moisant for having started outside the official time window, and the international flying association eventually disqualified the American, stripping him of his Statue of Liberty victory.)

On the final day of the international meet Moisant was quoted as saying: “Within a few years—maybe only three or four—I expect to fly from America to Europe in an aeroplane. This is not at all a wild prophecy. It is based upon facts. We shall soon have metal airships, which shall fly at the rate of 100 miles an hour.” A metal “flying boat” was in fact prepared to cross the Atlantic four years later, when World War I intervened. The first crossing had to wait until 1919.

Meanwhile, John and Fred Moisant formed a traveling “aerial circus.” They contracted with a number of international aviators and booked dates throughout the southeastern U.S. during the last two months of 1910. They also announced plans to open a flying school on Long Island. By the end of November the Wright brothers were said to be preparing patent infringement suits against the Moisants.

John Moisant expressed interest in a prize being offered for the first flight from Havana to Key West, rumored to be $20,000. As December arrived, he targeted two additional flight duration milestones: the Michelin International Cup and its $4,000 prize for the year’s longest flight within a closed circuit; and the Scientific American trophy for the year’s longest verified point-to-point flight. He figured to establish both records on December 31, giving potential competitors no time to break his marks before the qualifying period ended at midnight.

The Moisant International Aviators were performing in New Orleans during the final week of 1910, but bad weather ruled out a point-to-point attempt. Given the distance involved in the circuit flight—the record then stood at 363 miles of continuous flying—Moisant borrowed the more powerful Blériot of a teammate, René Barrier, and planned to spend all day in the air.

The wind was fairly strong when he ascended at 9:00 a.m. on December 31 and flew west of New Orleans to a special field designated for the attempt, which was to be witnessed by Aero Club of America officials. The terms of the Michelin prize required Moisant to fly along a marked course, always within sight of the judges. When he was blown sideways just before landing to make an official start, he attempted to return to the course.

Perhaps because the larger gasoline tank necessary for the record-breaking attempt altered the balance he was used to, or because Barrier’s machine was unfamiliar to him, when Moisant made the minor adjustment the aeroplane “turned head downward and the spectators saw the aviator pitch clear of the machine, falling like a plummet fully 100 feet, landing on his head.” John Moisant, America’s hero, died from a broken neck on a field just outside New Orleans. The site of the crash, used later for keeping cattle, was named “Moisant Stock Yards,” and the airport eventually built there received the identifier MSY. That’s the code used to this day for Louis Armstrong International Airport.

Fred Moisant went on to open the Moisant Aviation School in April 1911 at Mineola on Long Island, at first using Blériot monoplanes but eventually manufacturing his own.

Matilde Moisant, ten years younger than John, was a different sort of revolutionary. She wanted to fly, because her brother had. Matilde began taking flying lessons at the Moisant school in July, and within a month she became the second licensed female pilot in America. In September she established an altitude record for women, rising to above 1,200 feet. In October her defiance of a prohibition against flying on Sundays led to a Keystone Kops-style chase across Long Island; with the help of friends, she got away from the sheriff.

Along with her brother Fred, Matilde Moisant led the International Aviators’ tour of Mexico in early 1912, in the midst of the Mexican Revolution. As her brother had, she crashed in Louisiana, but she escaped unhurt. Nevertheless, as the deaths of pioneer aviators began to mount, Moisant announced her intention to retire from exhibition flying. On April 14, at Wichita Falls, Texas, making what she had already said would be her final flight, she crashed again, and this time her machine and clothes caught fire. Her instructor dragged her from the burning plane, which was destroyed. Remarkably, she was unscathed.

In late 1912 Moisant visited her brothers in Central America and was quoted as opining that the Panama Canal was susceptible to aerial bombardment. Rumors surfaced during World War I of her having volunteered her services, first to the French (to attack Zeppelins) and later to the Americans (to fly along the Mexican border). But the next time she actually went aloft was in 1929, on her first flight as a passenger.

Moisant lived in Salvador until roughly 1920, when she moved to Los Angeles. In her later years she returned to flying, reportedly continuing to do so into her seventies. She remained in southern California until her death in 1964 at age 85. On what would have been her eighty-sixth birthday she was inurned at the Portal of the Folded Wings Shrine to Aviation, beside the remains of her brother John.

Motion picture footage of John Moisant’s departure on his Paris-to-London flight can be found at https://www.youtube.com/watch?v=NH1nCr_WO5I